Login
We pay for content
Solutions
Selection and comparison of IT productPrice calculatorROI calculatorsBonus for reference
Catalogs
ProductsDeploymentsCompaniesDEALSCategories
For VendorsBlog
B2B platform for IT buyers, vendors and suppliersCategoriesSoftwareApplication SoftwareEngineering ApplicationsCAE - Computer-aided engineering 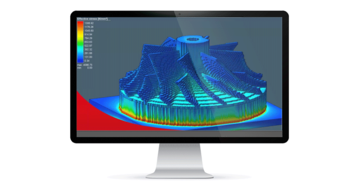 Computer Software used to analyse CAD geometry tools that have been developed to support these activities are considered CAE tools. CAE tools are being used, for example, to analyse the robustness and performance of components and assemblies. The term encompasses simulation, validation, and optimisation of products and manufacturing tools. In the future, CAE systems will be major providers of information to help support design teams in decision making. Computer-aided engineering is used in many fields such as automotive, aviation, space, and shipbuilding industries.

The term CAE has also been used by some in the past to describe the use of computer technology within engineering in a broader sense than just engineering analysis. It was in this context that the term was coined by Jason Lemon, founder of SDRC in the late 1970s. This definition is however better known today by the terms CAx and PLM.

In general, there are three phases in any computer-aided engineering task:

This cycle is iterated, often many times, either manually or with the use of commercial optimization software.

Even though CAE has built a strong reputation as a verification, troubleshooting and analysis tool, there is still a perception that sufficiently accurate results come rather late in the design cycle to really drive the design. This can be expected to become a problem as modern products become ever more complex. They include smart systems, which leads to an increased need for multi-physics analysis including controls, and contain new lightweight materials, to which engineers are often less familiar. CAE software companies and manufacturers are constantly looking for tools and process improvements to change this situation. On the software side, they are constantly looking to develop more powerful solvers, better use computer resources and include engineering knowledge in pre- and post-processing. On the process side, they try to achieve a better alignment between 3D CAE, 1D System Simulation and physical testing. This should increase modeling realism and calculation speed. On top of that, they try to better integrate CAE in the overall product lifecycle management. In this way, they can connect product design with product use, which is an absolute must for smart products. Such an enhanced engineering process is also referred to as predictive engineering analytics.

What does Computer-Aided Engineering (CAE) mean?

Computer-aided engineering (CAE) is the process of solving engineering problems through the use of sophisticated, interactive graphical software.

CAE is one of the leading softwares employed by manufacturing organizations to mass produce products in a factory-based environment. It allows for more computations than is possible by hand, especially when it is coupled with optimization systems.

A CAE program is a mathematical model written in a programming language using a set of algortihms that define the manufacturing processes.

The process starts by first defining the analysis of the mathematical phenomenon. Next, the equations have to be defined. Finally, a model of physical configuration is created.This model may consist of 2-D or 3-D figures/shapes/curves/surfaces. This model is than applied to an actual production mechanism to design and develop the product.