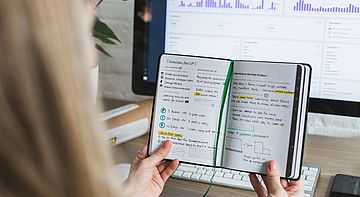 An electronic dictionary is a dictionary whose data exists in digital form and can be accessed through a number of different media. Electronic dictionaries can be found in several forms, including software installed on tablet or desktop computers, mobile apps, web applications, and as a built-in function of E-readers. They may be free or require payment.

Most of the early electronic dictionaries were, in effect, print dictionaries made available in digital form: the content was identical, but the electronic editions provided users with more powerful search functions. But soon the opportunities offered by digital media began to be exploited. Two obvious advantages are that limitations of space (and the need to optimize its use) become less pressing, so additional content can be provided; and the possibility arises of including multimedia content, such as audio pronunciations and video clips.

Publishers and developers of electronic dictionaries may offer native content from their own lexicographers, licensed data from print publications, or both, as in the case of Babylon offering premium content from Merriam Webster, and Ultralingua offering additional premium content from Collins, Masson, and Simon & Schuster, and Paragon Software offering original content from Duden, Britannica, Harrap, Merriam-Webster and Oxford.

The most popular products in category Electronic dictionaries All category products

What are the capabilities of electronic dictionaries?

Compared with printed analogues, computer dictionaries provide the user with many additional features: