Login
We pay for content
Solutions
Selection and comparison of IT productPrice calculatorROI calculatorsBonus for reference
Catalogs
ProductsDeploymentsCompaniesDEALSCategories
For VendorsBlog
B2B platform for IT buyers, vendors and suppliersCategories
Instant Communications Applications 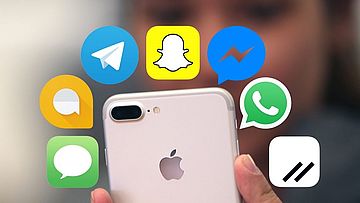 Instant messaging (IM) technology is a type of online chat that offers real-time text transmission over the Internet. A LAN messenger operates in a similar way over a local area network. Short messages are typically transmitted between two parties, when each user chooses to complete a thought and select "send". Some IM applications can use push technology to provide real-time text, which transmits messages character by character, as they are composed. More advanced instant messaging can add file transfer, clickable hyperlinks, Voice over IP, or video chat.

Non-IM types of chat include multicast transmission, usually referred to as "chat rooms", where participants might be anonymous or might be previously known to each other (for example collaborators on a project that is using chat to facilitate communication). Instant messaging systems tend to facilitate connections between specified known users (often using a contact list also known as a "buddy list" or "friend list"). Depending on the IM protocol, the technical architecture can be peer-to-peer (direct point-to-point transmission) or client-server (an Instant message service center retransmits messages from the sender to the communication device).

Instant messaging is a set of communication technologies used for text-based communication between two or more participants over the Internet or other types of networks. IM–chat happens in real-time. Of importance is that online chat and instant messaging differ from other technologies such as email due to the perceived quasi-synchrony of the communications by the users. Some systems permit messages to be sent to users not then 'logged on' (offline messages), thus removing some differences between IM and email (often done by sending the message to the associated email account).

IM allows effective and efficient communication, allowing immediate receipt of acknowledgment or reply. However IM is basically not necessarily supported by transaction control. In many cases, instant messaging includes added features which can make it even more popular. For example, users may see each other via webcams, or talk directly for free over the Internet using a microphone and headphones or loudspeakers. Many applications allow file transfers, although they are usually limited in the permissible file-size.

It is usually possible to save a text conversation for later reference. Instant messages are often logged in a local message history, making it similar to the persistent nature of emails.

Compare of products in the category Instant Communications Applications

What is instant messaging used for?

Instant messaging (IM) technology is a type of online chat that offers real-time text transmission over the Internet. A LAN messenger operates in a similar way over a local area network. Short messages are typically transmitted between two parties when each user chooses to complete a thought and select "send".

What kind of protocols are used in instant messaging applications?

Two of the main protocols used for instant messaging in the market today are WebSocket and XMPP.

What is the difference between texting and instant messaging?

What are the key features of instant messaging?

The exchange of text has long been the chief function of instant messaging, but it is now one feature of many. The ability to insert images and emojis into messages is now standard in many clients, as are file transfers. Facebook Messenger even enables users to send money via IM.

Web Sockets vs. XMPP: Which Is Better For Chat Application?