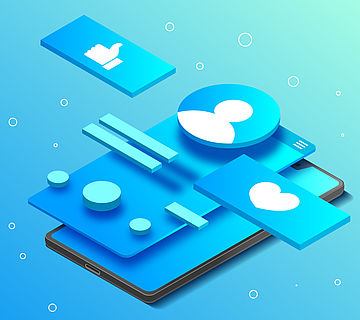 iOS is Apple’s mobile OS that runs on an iPhone, iPad, iPod Touch hardware. Apple provides tools and resources for creating iOS apps and accessories for these devices. As an iOS developer, you can program in native languages such as Swift or Objective-C or build cross-platform native applications using React Native (JavaScript) or Xamarin (C# & F#).

Developer Requirements. To develop iOS apps, you need a Mac computer running the latest version of Xcode. Xcode is Apple’s IDE (Integrated Development Environment) for both Mac and iOS apps. Xcode is the graphical interface you'll use to write iOS apps. Xcode includes the iOS SDK, tools, compilers, and frameworks you need specifically to design, develop, write code, and debug an app for iOS. For native mobile app development on iOS, Apple suggests using the modern Swift programming language. It is important to note that Xcode only runs on Mac OS X and the only supported way to develop iOS apps. Like desktop software, iOS development software are designed using a range of programming languages and frameworks.

iOS software development kit. Mobile iOS app creation software requires access to software development kits (SDKs) that provide an environment through which programmers can design and test code in a simulated mobile environment. Some iOS SDK essentials are the Cocoa Touch frameworks that include the UIKit, GameKit, PushKit, Foundation Kit, and MapKit. These frameworks and others allow you manipulate the iPhone or iPad camera, add voice interaction using SiriKit, explore music with MusicKit, expand viewing and listening via AirPlay 2, and even add iMessage Business Chat to your application. iOS 11 added the power of machine learning with Core ML and augmented reality (AR) experiences with ARKit.

Beta Testing. Once you have built and tested (using XCTest framework or iOS Unit test) your app, you can invite users to your apps and collect feedback using TestFlight prior to deploying to the App Store. This is a good time for testing Push Notifications, data storage using Core Data, and making network calls to 3rd party APIs. To get going, you simply upload a beta build of your app, and use iTunes Connect to add the name and email of testers.

Cloud Testing.Testing your iOS app on real devices is critically important since the performance of the real device, different operating system versions, modifications made by manufacturer and carriers firmware may lead to unexpected issues with your app. Testing on real device gives you a more accurate understanding of how your users interact with your app. On the other hand, obtaining physical devices for testing is a logistical challenge. This is where cloud testing comes into play. With cloud testing, you can test your application on real devices that are accessible on the cloud.

Deployment. Once you have built, tested, and beta tested your iOS app, you can deploy to the App Store. At this point, you must join the Apple Developer Program. As a member, you’ll get access to beta iOS app development software, advanced app capabilities, extensive beta testing tools, and app analytics.

What are the advantages of iOS App Development?

IDE is the acronym for Integrated Development Environment. This contains a set of tools, resources and programming essentials within itself. It helps software/web/ mobile app developers to create new programs. This is a comprehensive solution for creating software or mobile app independently. These resources make development, deployment and debugging processes very simple. Choosing an IDE for iPhone app development is dependent on the budget, kind of programming language you prefer, etc. There are so many functionalities in an IDE that gives you a lot of benefits for app development.

The IDE makes strategies and streamlines the development phase for your entire team. It has many tools for automation, programming, debugging, compiling and for interpretation. There are three general types of IDE available. They are cloud-based, software as a service (SaaS) type and installing on the server type. IDE for iOS application development software is preferred bycompanies to reduce development time and costs. It helps in accurate testing and easy coding. Integration is also possible with these IDEs. It is as simple as a word processing program used by developers to create robust mobile applications.

Benefits of Developing An iOS Application For Your Business