Login
We pay for content
Solutions
Selection and comparison of IT productPrice calculatorROI calculatorsBonus for reference
Catalogs
ProductsDeploymentsCompaniesDEALSCategories
For VendorsBlog
B2B platform for IT buyers, vendors and suppliersCategories
Mobile Software Development 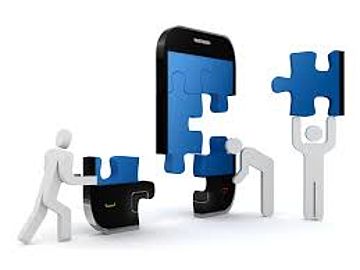 Mobile app development is the act or process by which a mobile app is developed for mobile devices, such as personal digital assistants, enterprise digital assistants or mobile phones. These applications can be pre-installed on phones during manufacturing platforms, or delivered as web applications using server-side or client-side processing (e.g., JavaScript) to provide an "application-like" experience within a Web browser. Application software developers also must consider a long array of screen sizes, hardware specifications, and configurations because of intense competition in mobile software and changes within each of the platforms. Mobile app development has been steadily growing, in revenues and jobs created. A 2013 analyst report estimates there are 529,000 direct app economy jobs within the EU 28 members, 60% of which are mobile app developers.

As part of the development process, mobile user interface (UI) design is also essential in the creation of mobile apps. Mobile UI considers constraints, contexts, screen, input, and mobility as outlines for design. The user is often the focus of interaction with their device, and the interface entails components of both hardware and software. User input allows for the users to manipulate a system, and device's output allows the system to indicate the effects of the users' manipulation. Mobile UI design constraints include limited attention and form factors, such as a mobile device's screen size for a user's hand(s). Mobile UI contexts signal cues from user activity, such as location and scheduling that can be shown from user interactions within a mobile app. Overall, mobile UI design's goal is mainly for an understandable, user-friendly interface. The UI of mobile apps should: consider users' limited attention, minimize keystrokes, and be task-oriented with a minimum set of functions. This functionality is supported by mobile enterprise application platforms or integrated development environments (IDEs).

What is the native app development?

Unlike websites and web applications, native mobile apps don’t run in the browser. You need to download them from platform-specific app stores such as Apple’s App Store and Google Play. After installation, you can access each app by tapping its respective icon on the screen of your device.

Native app development requires different skills and technologies than mobile website development. You don’t have to worry about browser behavior and compatibility. You can use the native features of mobile OSs to deliver the user experience and implement the functionalities of your app.

What is the difference between a native mobile app and a hybrid app?

Mobile apps have two types: native and hybrid apps. At first glance, both have similar features and design but the underlying technology is different. As the name suggests, hybrid apps are a combination of web apps and native mobile apps. You can build them using web technologies: HTML, CSS, and JavaScript. You can also upload them to app stores and users can install them as native Android or iOS applications.

The main advantages of hybrid apps are portability and the simplicity of development. You only have to write the code once and your hybrid app will run on different operating systems. You can use hybrid frameworks like Ionic and Apache Cordova to create cross-platform hybrid applications. By contrast, native mobile apps have to be written in platform-specific languages such as Java, Swift, or Objective-C.

Native mobile apps can access the built-in features of smartphones such as the camera and microphone by default. If you have a hybrid app you need to rely on plugins like Cordova plugins to use the native capabilities of the user’s device.

Hybrid apps also depend on WebViews to render their user interfaces. WebViews are in-app browsers that allow mobile applications to access and display web content. This is how Android and iOS devices are able to run hybrid apps built with HTML, CSS, and JavaScript as native mobile applications.

What are the benefits of native mobile app development?

Although hybrid apps are easier and cheaper to develop, native mobile apps have many benefits, too.

Native mobile apps directly interact with native APIs without depending on middleware such as plugins and WebViews. As there are fewer dependencies, native mobile apps are faster and more responsive than hybrid apps. This is especially important for performance-centric apps like games and graphic-heavy applications.

As native mobile apps are developed using native SDKs (software development kits), their UIs look consistent with their platform. This ensures a better user experience, as there are no discrepancies between the OS and app design.

Native mobile apps can immediately access the latest iOS or Android features. As web technologies can’t directly use native APIs, hybrid apps have to wait until there’s a plugin that supports the new feature.

Because of their architecture, native mobile apps comply better with app store guidelines. In 2017, Apple restricted its submission guidelines. Since then, they have begun to reject apps that rely too much on WebViews, such as Ionic View that allowed developers to test their Ionic applications. As it’s likely that app stores will continue cracking down on hybrid apps, native mobile apps are also a more future-proof investment.

Understanding native app development - what you need to know in 2019