Login
We pay for content
Solutions
Selection and comparison of IT productPrice calculatorROI calculatorsBonus for reference
Catalogs
ProductsDeploymentsCompaniesDEALSCategories
For VendorsBlog
B2B platform for IT buyers, vendors and suppliersCategoriesHardwarePeripheralsMonitor 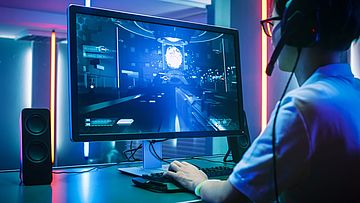 The most popular products in category Monitor All category products

What is an LCD monitor (TFT)?

LCD TFT is one of the names of the liquid crystal display, which uses an active matrix controlled by thin-film transistors. The TFT amplifier for each subpixel is used to increase the speed, contrast and clarity of the display image.

How does an LCD monitor work?

Each pixel of the LCD display consists of a layer of molecules between two transparent electrodes, and two polarizing filters, the polarization planes of which (as a rule) are perpendicular. In the absence of liquid crystals, the light transmitted by the first filter is almost completely blocked by the second.

The surface of the electrodes in contact with liquid crystals is specially processed for the initial orientation of the molecules in one direction. In the TN matrix, these directions are mutually perpendicular, therefore, the molecules line up in a helical structure in the absence of voltage. This structure refracts the light in such a way that, before the second filter, the plane of its polarization rotates, and light passes through it already without loss. Except for the absorption by the first filter of half of the unpolarized light, the cell can be considered transparent. If voltage is applied to the electrodes, the molecules tend to line up in the direction of the field, which distorts the helical structure. In this case, the elastic forces counteract this, and when the voltage is turned off, the molecules return to their original position. With a sufficient field value, almost all molecules become parallel, which leads to the opacity of the structure. By varying the voltage, you can control the degree of transparency. If a constant voltage is applied for a long time, the liquid crystal structure may degrade due to ion migration. To solve this problem, an alternating current is applied, or a change in the field polarity at each addressing of the cell (the opacity of the structure does not depend on the field polarity). In the entire matrix, each of the cells can be controlled individually, but with an increase in their number this becomes difficult to accomplish, as the number of required electrodes increases. Therefore, row and column addressing is used almost everywhere. The light passing through the cells can be natural - reflected from the substrate (in LCD displays without backlight). But more often an artificial light source is used, in addition to independence from external lighting, this also stabilizes the properties of the resulting image. Thus, a full-fledged LCD monitor consists of electronics that process the input video signal, LCD matrix, backlight module, power supply and housing. It is the combination of these components that determines the properties of the monitor as a whole, although some characteristics are more important than others.

What are the most important features of LCD monitors?

What are the technologies for LCD monitors?

LCD monitors were developed in 1963 at the David Sarnoff Research Center at RCA, Princeton, New Jersey.

The main technologies in the manufacture of LCD displays: TN + film, IPS and MVA. These technologies differ in the geometry of the surfaces, the polymer, the control plate, and the front electrode. Of great importance are the purity and type of polymer with the properties of liquid crystals, used in specific developments.