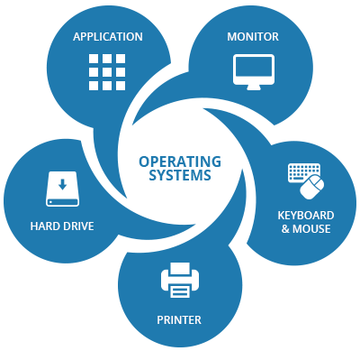 Technological advancements and rising awareness among consumers has to lead to increased demand for computer systems, consequently increasing the demand for operating systems and driving the market. However, the growth has been hampered by the rapid usage of pirated versions of operating systems. Moreover, the development of different applications in mobile phones mainly due to android OS among the youth will open the opportunities of operating system market in the upcoming years.

Currently, there are a large number of different types of operating systems that differ in application areas, hardware platforms, implementation methods, etc.

F.A.Q. about Operating System and Subsystem

What is an operating system (OS)?

An operating system (OS) is software, consisting of programs and data, that runs on computers and manages the computer hardware and provides common services for efficient execution of various application software. For hardware functions such as input and output and memory allocation, the operating system acts as an intermediary between application programs and the computer hardware, although the application code is usually executed directly by the hardware, but will frequently call the OS or be interrupted by it. Operating systems are found on almost any device that contains a computer - from cellular phones and video game consoles to supercomputers and web servers.

What are the tasks of the Operating system?

Processor Management: The main tasks in processor management are ensuring that each process and application receives enough of the processor's time to function properly, using maximum processor cycles for real work as is possible and switch between processes in a multi-tasking environment.

Memory and Storage Management: The tasks include allotting enough memory required for each process to execute and efficiently use the different types of memory in the system.

Providing Common User Interface: A user interface (UI) brings a formal structure to the interaction between a user and the computer.