Login
We pay for content
Solutions
Selection and comparison of IT productPrice calculatorROI calculatorsBonus for reference
Catalogs
ProductsDeploymentsCompaniesDEALSCategories
For VendorsBlog
B2B platform for IT buyers, vendors and suppliersCategoriesHardwarePC - personal computerPortable PC 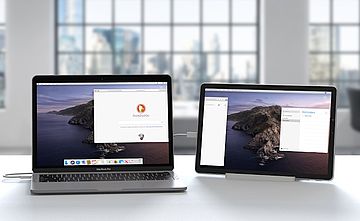 A portable computer is a computer designed to be easily moved from one place to another and included a display and keyboard. The first commercially sold portable was the 50 pound IBM 5100, introduced 1975. The next major portables were Osborne's 24 pound CP/M-based Osborne 1 (1981) and Compaq's 28 pound 100% IBM PC compatible Compaq Portable (1983). These "luggable" computers lacked the next technological development, not requiring an external power source; that feature was introduced by the laptop. Laptops were followed by lighter models, so that in the 2000's mobile devices and by 2007 smartphones made the term almost meaningless. The 2010's introduced wearable computers such as smartwatches.

Portable computers, by their nature, are generally microcomputers. Larger portable computers were commonly known as 'Lunchbox' or 'Luggable' computers. They are also called 'Portable Workstations' or 'Portable PCs'. In Japan they were often called 'Bentocom'. (ベントコン, Bentokon) from "bento".

Portable computers, more narrowly defined, are distinct from desktop replacement computers in that they usually were constructed from full-specification desktop components, and often do not incorporate features associated with laptops or mobile devices. A portable computer in this usage, versus a laptop or other mobile computing device, have a standard motherboard or backplane providing plug-in slots for add-in cards. This allows mission specific cards such as test, A/D, or communication protocol (IEEE-488, 1553) to be installed. Portable computers also provide for more disk storage by using standard disk drives and provide for multiple drives.

The most popular products in category Portable PC All category products

What does Portable Computer mean?

A Portable computer is a computer that comes with a keyboard and display and one which can be easily relocated or transported, although less convenient compared to a notebook.

They have lower specifications and are not well suited for full-time usage as they are less ergonomic. However, they take less space than desktop computers and come with most features found on a desktop.

What are the advantages of portable PC?

Advantages of a portable computer:

What are the disadvantages of portable PC?

Disadvantages of a portable computer: