Login
We pay for content
Solutions
Selection and comparison of IT productPrice calculatorROI calculatorsBonus for reference
Catalogs
ProductsDeploymentsCompaniesDEALSCategories
For VendorsBlog
B2B platform for IT buyers, vendors and suppliersCategoriesSoftwareApplication SoftwareRemote Desktop Software 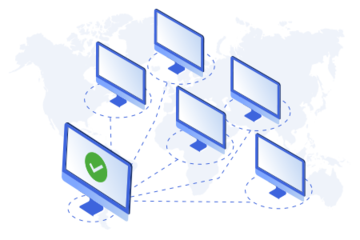 The term remote desktop refers to a software or operating system feature that allows a personal computer's desktop environment to be run remotely on one system (usually a PC, but the concept applies equally to a server), while being displayed on a separate client device. Remote desktop applications have varying features. Some allow attaching to an existing user's session (i.e., a running desktop) and "remote controlling", either displaying the remote control session or blanking the screen. Taking over a desktop remotely is a form of remote administration.

Remote access can also be explained as remote control of a computer by using another device connected via the Internet or another network. This is widely used by many computer manufacturers and large businesses' help desks for technical troubleshooting of their customers' problems.

Remote desktop software captures the mouse and keyboard inputs from the local computer (client) and sends them to the remote computer (server). The remote computer in turn sends the display commands to the local computer. When applications with many graphics including video or 3D models need to be controlled remotely, a remote workstation software that sends the pixels rather than the display commands must be used to provide a smooth, like-local experience. HP Remote Graphics Software is one such remote workstation solution.

Remote desktop sharing is accomplished through a common client/server model. The client, or VNC viewer, is installed on a local computer and then connects via a network to a server component, which is installed on the remote computer. In a typical VNC session, all keystrokes and mouse clicks are registered as if the client were actually performing tasks on the end-user machine.

A main use of remote desktop software is remote administration and remote implementation. This need arises when software buyers are far away from their software vendor. Most remote access software can be used for "headless computers": instead of each computer having its own monitor, keyboard and mouse or using a KVM switch, one computer can have a monitor, keyboard, mouse, and remote control software, and control many headless computers. The duplicate desktop mode is useful for user support and education. Remote control software combined with telephone communication can be nearly as helpful for novice computer-users as if the support staff were actually there.

Since the advent of cloud computing, remote desktop software can be housed on USB hardware devices, allowing users to connect the device to any PC connected to their network or the Internet and recreate their desktop via a connection to the cloud. This model avoids one problem with remote desktop software, which requires the local computer to be switched on at the time when the user wishes to access it remotely. (It is possible with a router with C2S VPN support, and Wake on LAN equipment, to establish a virtual private network (VPN) connection with the router over the Internet, if not connected to the LAN, switch on a computer connected to the router, then connect to it.)

Compare of products in the category Remote Desktop Software