Login
We pay for content
Solutions
Selection and comparison of IT productPrice calculatorROI calculatorsBonus for reference
Catalogs
ProductsDeploymentsCompaniesDEALSCategories
For VendorsBlog
B2B platform for IT buyers, vendors and suppliersCategories
Voice Recognition 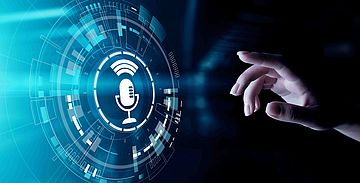 Voice or speaker recognition is the ability of a machine or program to receive and interpret dictation or to understand and carry out spoken commands. Voice recognition has gained prominence and use with the rise of AI and intelligent assistants, such as Amazon's Alexa, Apple's Siri and Microsoft's Cortana.
Voice recognition systems enable consumers to interact with technology simply by speaking to it, enabling hands-free requests, reminders and other simple tasks.

Voice recognition technology on computers requires that analog audio be converted into digital signals, known as analog-to-digital conversion. For a computer to decipher a signal, it must have a digital database, or vocabulary, of words or syllables, as well as a speedy means for comparing this data to signals. The speech patterns are stored on the hard drive and loaded into memory when the program is run. A comparator checks these stored patterns against the output of the A/D converter - an action called pattern recognition.

In practice, the size of a speech recognition system effective vocabulary is directly related to the random access memory capacity of the computer in which it is installed. A voice recognition program runs many times faster if the entire vocabulary can be loaded into RAM, as compared with searching the hard drive for some of the matches.

The government is also looking for ways to use voice recognition technology and voice identification for security purposes. The National Security Agency (the official U.S. cryptologic organization of the United States Intelligence Community under the Department of Defense) has used voice recognition systems dating back to 2004.

The most popular products in category Voice Recognition All category products

What is voice recognition?

Voice recognition is an alternative to typing on a keyboard. Put simply, you talk to the computer and your words appear on the screen. The software has been developed to provide a fast method of writing on a computer and can help people with a variety of disabilities. It is useful for people with physical disabilities who often find typing difficult, painful or impossible. Voice-recognition software can also help those with spelling difficulties, including users with dyslexia, because recognised words are almost always correctly spelled.

What is voice recognition software?

Voice-recognition software programmes work by analysing sounds and converting them to text. Once correctly set up, the systems should recognise around 95% of what is said if you speak clearly. Several programmes are available that provide computer speech recognition. These systems have mostly been designed for Windows operating systems, however programmes are also available for Mac OS X. In addition to third-party software, there are also voice-recognition programmes built in to the operating systems of Windows Vista and Windows 7, 8, 10. Most specialist voice applications include the software, a microphone headset, a manual and a quick reference card. You connect the microphone to the computer, either into the soundcard or via a USB or similar connection.

Voice recognition engines that are speaker independent generally deal with this fact by limiting the grammars they use. By using a smaller list of recognized words, the speech engine is more likely to correctly recognize what a speaker said.

This makes speaker–independent software ideal for most IVR systems, and any application where a large number of people will be using the same system. Speaker dependent software is used more widely in dictation software, where only one person will use the system and there is a need for a large grammar.

What are the voice recognition applications?

The technology is gaining popularity in many areas and has been successful in the following:

What is dictation software?

With the best dictation software, you can compose memos, emails, speeches, and other writing using voice translator speech to text. Some dictation apps also give you the power to control your computer or mobile device with spoken words, too, letting you open apps and navigate the web when you aren't able to or don't want to with your fingers.

Dictation apps have a variety of use cases. They're well known among the accessibility community, as not everyone has full and dexterous use of their fingers and hands for typing, moving a mouse, or tapping a touchscreen. They're also quite popular with productivity enthusiasts because once you get comfortable dictating, it's typically faster than typing. Dictating also enables multitasking. You can write while walking, cooking, or even breastfeeding.

Some people also find that writing by dictating silences their internal editor. You might be more inclined to get all your thoughts out first and review them later, rather than revising ideas as you form them.

In the last few years, dictation software has become more readily available, easier to use, and much less expensive. Also sometimes called voice-to-text apps or voice recognition apps, these tools turn your spoken words into writing on the screen quickly and accurately.

Some best voice recognition software are standalone software programs while others are features that come inside other apps or operating systems. Take Google Docs Voice Typing, for example. It's a feature inside Google Docs, rather than a standalone app. You can use it to write in Google Docs as well as edit and format your text.