Login
We pay for content
Solutions
Selection and comparison of IT productPrice calculatorROI calculatorsBonus for reference
Catalogs
ProductsDeploymentsCompaniesDEALSCategories
For VendorsBlog
B2B platform for IT buyers, vendors and suppliersCategoriesServicesSoftware DevelopmentWeb Development 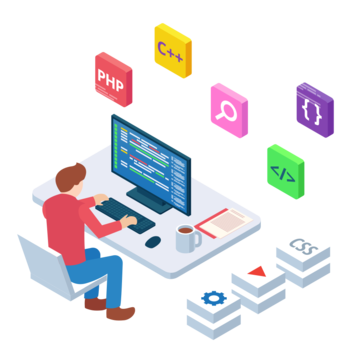 For larger organizations and businesses, web development teams can consist of hundreds of people (web developers) and follow standard methods like Agile methodologies while developing websites. Smaller organizations may only require a single permanent or contracting developer, or secondary assignment to related job positions such as a graphic designer or information systems technician. Web development may be a collaborative effort between departments rather than the domain of a designated department. There are three kinds of web developer specialization: front-end developer, back-end developer, and full-stack developer. Front-end developers are responsible for behavior and visuals that run in the user browser, while back-end developers deal with the servers.

Since the commercialization of the web, web development has been a growing industry. The growth of this industry is being driven by businesses wishing to use their website to advertise and sell products and services to customers.

There are many open source tools for web development such as BerkeleyDB, GlassFish, LAMP (Linux, Apache, MySQL, PHP) stack and Perl/Plack. This has kept the cost of learning web development to a minimum. Another contributing factor to the growth of the industry has been the rise of easy-to-use WYSIWYG web-development software, such as Adobe Dreamweaver, BlueGriffon and Microsoft Visual Studio. Knowledge of HyperText Markup Language (HTML) or of programming languages is still required to use such software, but the basics can be learned and implemented quickly.

An ever-growing set of tools and technologies have helped developers build more dynamic and interactive websites. Further, web developers now help to deliver applications as web services which were traditionally only available as applications on a desk-based computer. This has allowed for many opportunities to decentralize information and media distribution. Examples can be seen with the rise of cloud services such as Adobe Creative Cloud, Dropbox and Google Drive. These web services allow users to interact with applications from many locations, instead of being tied to a specific workstation for their application environment.

Examples of dramatic transformation in communication and commerce led by web development include e-commerce. Online auction sites such as eBay have changed the way consumers find and purchase goods and services. Online retailers such as Amazon.com and Buy.com (among many others) have transformed the shopping and bargain-hunting experience for many consumers. Another example of transformative communication led by web development is the blog. Web applications such as WordPress and Movable Type have created blog-environments for individual websites. The increased usage of open-source content management systems and enterprise content management systems has extended web development's impact at online interaction and communication.

Web development has also impacted personal networking and marketing. Websites are no longer simply tools for work or for commerce, but serve more broadly for communication and social networking. Web sites such as Facebook and Twitter provide users with a platform to communicate and organizations with a more personal and interactive way to engage the public.

The most popular products in category Web Development All category products

What is the Priority of a Web Developer?

A web developer or programmer is someone who takes a web design – which has been created by either a client or a design team – and turns it into a website. They do this by writing lines and lines of complicated code, using a variety of languages. Web developers have quite a difficult job, because they essentially have to take a language we understand, such as English, and translate it into a language that a computer understands, such as Python or HTML.

As you can imagine, this can take a lot of time and effort and requires an intricate understanding of various programming languages and how they are used. Different types of developers specialize in different areas, which means that large web projects are usually a collaboration between several different developers.

What Types Of Web Developers Are There?

Unfortunately, the question “What does a web developer do?” doesn’t have one simple answer. As noted above, there are some different types of web developers, each of which focuses on a different aspect of the creation of a website.

A front-end developer is someone who takes a client or design team’s website design and writes the code needed to implement it on the web. A decent front-end web developer will be fluent in at least three programming languages – HTML, CSS, and JavaScript.

HTML allows them to add content to a website while splitting it into headings, paragraphs, and tables. CSS lets a decent developer style the content and change things like colors, sizes, and borders. JavaScript allows the inclusion of interactive elements, such as push buttons. We will go into more detail about these languages later.

So, what do web developers do when they work on the front end of a website?

This means that they have to create the code and programs which power the website’s server, databases, and any applications that it contains. The most important thing as a back-end developer is the ability to be able to create a clean, efficient code that does what you want it to in the quickest way possible. Since website speed is a major consideration when it comes to search engine optimization (SEO), it is a large factor when developing the back-end.

To fully explain what is a web developer it is essential to know that back-end developers use a wide range of different server-side languages to build complicated programs. Some of the most popular languages used include PHP, Python, Java, and Ruby. JavaScript is also becoming increasingly widespread as a back-end development language, while SQL is commonly used to manage and analyze data in website databases.

Since different websites have different needs, a back-end developer must be flexible, able to create different programs, and they absolutely must have a clear, in-depth understanding of the languages that they use. This is very important to make sure that they can come up with the most efficient method of creating the required program while making sure that it is secure, scalable, and easy to maintain.

If you are looking for a quick, simple answer to the question “What is a web developer?”, then a full-stack developer is probably the closest thing that you’re going to get. Full-stack developers understand both front and back-end strategies and processes, which means that they are perfectly positioned to oversee the entire process.

In the case of small websites that don’t have a huge development budget, a full-stack developer will often be employed to build the entire website. In this case, it is extremely important for them to have a complete, in-depth understanding of both front and back-end development and how they work.

Learning full-stack development techniques has a huge range of benefits, including:

Although most developers start with either front or back-end specializations, there are a lot of reasons why you should consider branching out and learning both. It will make you a lot more employable, will give you a greater understanding of the whole concept of what is web development, and will make it easier for you to create entire websites on your own.