Login
We pay for content
Solutions
Selection and comparison of IT productPrice calculatorROI calculatorsBonus for reference
Catalogs
ProductsDeploymentsCompaniesDEALSCategories
For VendorsBlog
B2B platform for IT buyers, vendors and suppliersCategoriesHardwarePeripheralsProjector 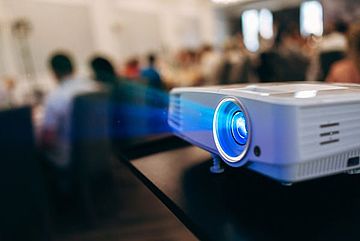 A video projector is an image projector that receives a video signal and projects the corresponding image on a projection screen using a lens system. All video projectors use a very bright ultra high pressure mercury lamp, LED or solid state blue, RB, RGB or remote fiber optic RGB lasers to provide the illumination required to project the image, and most modern ones can correct any curves, blurriness, and other inconsistencies through manual settings. If a blue laser is used, a phosphor wheel is used to turn blue light into white light, which is also the case with white LEDs. (White LEDs do not use lasers.) A wheel is used in order to prolong the lifespan of the phosphor, as it is degraded by the heat generated by the laser diode. Remote fiber optic RGB laser racks can be placed far away from the projector, and several racks can be housed in a single, central room. Each projector can use up to 2 racks, and several monochrome lasers are mounted on each rack, the light of which is mixed and transmitted to the projector booth using optical fibers. Projectors using RB lasers use a blue laser with a phosphor wheel in conjuntion with a conventional solid state red laser.

Video projectors are used for many applications such as conference room presentations, classroom training, home cinema and concerts. In schools and other educational settings, they are sometimes connected to an interactive whiteboard. In the late 20th century they became commonplace in home cinema. Although large LCD television screens became quite popular, video projectors are still common among many home theater enthusiasts.

A video projector, also known as a digital projector, may project onto a traditional reflective projection screen, or it may be built into a cabinet with a translucent rear-projection screen to form a single unified display device.

The cost of a projector is typically driven by its base technology, features, resolution, and light output. A projector with a higher light output (measured in lumens, “lm”) is required for a larger screen or for a room with a larger amount of ambient light. For example, a light output of approximately 1500 to 2500 ANSI lumens is suitable for small screens viewed in rooms with low ambient light; approximately 2500 to 4000 lm is suitable for medium-sized screens with some ambient light; over 4000 lm is needed for very large screens or for use in rooms with no lighting control such as conference rooms. High brightness large-venue models are increasingly common in Boardrooms, Auditoriums and other high profile spaces, and models up to 30,000 lm are used in large staging applications such as concerts, keynote addresses and displays projected on buildings.

A few camcorders have a built-in projector suitable to make a small projection; a few more powerful "pico projectors" are pocket-sized, and many projectors are portable.

The most popular products in category Projector All category products

What's the Difference Between DLP LCD, and LED Projectors?

Mainstream projectors use one of several technologies to project an image on a wall or screen. Liquid Crystal Display (LCD) projectors, which have been around for years, use three separate glass panels that separate the color spectrum into red, green, and blue to create an image. The newer digital light processing (DLP) processing integrates Texas Instruments’ DLP chip, which is a reflective surface with thousands of tiny, spinning mirrors, takes the reflected light and puts it through a color wheel to create an image. The smallest projectors, called Pico projectors, use solid-state technology, such as Light Emitting Diodes (LEDs), which are desirable in portable projectors for low power consumption.

How Much Brightness Do I Need?

Brightness (how much light the projector can produce) is measured in ANSI lumens. The brightness of the room where you’ll be projecting will dictate the lumens you will need. That is, brighter rooms need a projector with higher lumens. For dark rooms, 1000 to 1200 lumens is probably adequate, although professional presenters tend to want 1800 lumens or more. In addition, if you are projecting large images, you’ll want a projector with a higher brightness rating. When choosing your projector, consider your application, the size of your group, the size of your room and the amount of light in the room.

What Resolution Do I Need?

Resolution is the term used to describe the number of pixels, used to display an image. Higher resolutions--more pixels are used to create the image--allow you to display more information on your screen and create a crisper, cleaner image. Today, you’ll see a number of possible resolutions: SVGA (800x600 pixels), XGA (1024x768 pixels) and SXGA (1280x1024 pixels). For standard presentations, 800x600 pixels may be sufficient, but for other uses (such as larger images or advanced presentations) you’ll want a higher resolution, such as 1024x768. The highest resolutions may be needed for presenting detailed AutoCAD drawings or videos.

What Contrast Ratio Do I Need?

Contrast ratio measures how well a projector can reproduce black and white. Although the contrast ratio is not terribly important to those using projectors for still presentations, this measure is more important if you will be projecting video. Currently, there is no industry-standard method for measuring contrast ratio, so this stat may vary between manufacturers. Basically, a higher contrast ratio indicates a greater ability for the projector to show subtle color details and tolerate extraneous room light.

What Input/Output Options Do I Want?

How Much Should I Worry About Projector Weight?

Common sense should reign when decided what size projector to buy. Consider whether you will be traveling with your projector and choose accordingly. A hard-sized case with wheels will also ease transport.

What Is a Normal Warranty?

Depending on the projector brand, warranties do vary. Generally, the projector is covered for a year, with the lamp having a shorter coverage (30 days to six months).

How Long Will My Lamp Last?

Both DLP and LCD projectors integrate lamps (light bulbs optimized for use in a projector). Lamp life is measured in hours (example, 2000 or 4000), which for most users will translate to years of use. Over time, the brightness of the lamp may deteriorate. LED projectors, meanwhile, do not use a lamp. The result is that these projectors generate less heat and demand virtually no maintenance. Meanwhile, since LEDs incorporate no lead or mercury, these projectors provide a compelling solution for those seeking a green projector.